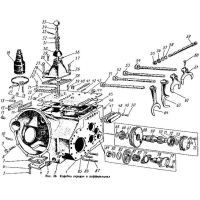 CAT T-16 is a seven forward gears and one reverse. The shafts are transverse to the longitudinal axis of the chassis, because of which and reduced longitudinal dimension, and can transmit the rotation to the differential by means of cylindrical gearwheels.

Torque is transmitted through the gear clutch master tapered shaft to the driven gear mounted on the splined Transmission input shaft end. On the primary shaft has gears are movable blocks 2nd and 3rd transmission, 5th and 6th gear and the fixed gear 4th transfer. VSH 1st gear set key (prisms.) And constantly meshed with a reverse gear block.

in the stationary secondary shaft arranged blocks gears 5th and 6th transmission, differential and 2nd transmitting, third gear; slidably mounted gear 4th and Reverse, the first transmission and the retardation. At the bottom of the transmission housing on ball bearings installed reverse gear and more gear. On the axis of the gear unit should also reverse. Gear delayed transmission produced from the block axis and being in a permanent coupling with the intermediate gear.

Differential T-16 needed to to provide independent rotation of the drive wheels at different speeds during cornering and driving on uneven. It consists of two satellites mounted on axle 2 bevel side gears splined to the ends of the spindles, with the housing cover. Spherical washers brass stand between the housing and the satellites. On the differential housing is mounted a crown gear differential. It rotates on two ball bearings. Bearing to the left is set to the GP chassis, bearing right is in the glass. In the case of straight motion and in conditions of equal resistance to movement of the drive wheels of the differential unit body rotates together with the axes in one piece. Equal to the angular velocity of the two semiaxes of the satellite is obtained by wedging tapered side gears.

The movement of the wet surface or loosely gives reduced permeability due to differential. When one wheel reaches the portion with small traction, can increase permeability by locking the differential. Thus a rigid connection semiaxes rotates them together, thus giving the chassis overcome difficult sites via coupling properties of the second drive wheel.

The locking mechanism consists of moving along the splined grooves of the cam sleeve right axle, the differential lock fork rod, springs eg. bushing, rod lever and the axis together with the pedal. The axis is located on the cover of the differential block secured directly to the housing cover GP. By pressing the pedal lever is raised the rod and at the same time compresses the spring. Finger lock plug is displaced with the stem upward causing rotation of the plug on the axes of the rolling cup tides are in bearings. In this case, the lower ends of the forks and crackers move towards differential until the full entry into the clutch cam trough differential housing cover. Semiaxis thus rigidly connected. After graduating from the slip pedal must be released. In this case, the coupling returns to its normal position automatically and semi-axes is disconnected.

We call you back

Parts manufacturing facilities for tractors and combines on your drawings!

If it is not found in the needed parts catalog, the Motor-Agro experts as soon as possible ready to make it in the required amount according to your drawings.

For more information and orders please call directly to the engineering department:
+38 057 714 64 98