Hydraulic equipment is necessary to control the mounted and trailed equipment, which is aggregated with a tractor. Establish a universal unit-hydraulic system to which the units are mounted separately and can be dismantled independently of each other. Manages various attachments because of this, and is called a universal 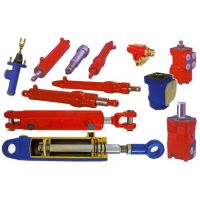 It consists of a tank or a tank with a filter pump with a drive and a distributor tube for the overflow, Conn. interconnected by pipelines and hoses. Drive represented by a pair of gears and a gear clutch disconnection can be installed in the gear housing of the engine or the distribution of the rear plate Bldg. rear axle. In this case the pump is used to drive the PTO.

GN drive pinion is always in mesh with the driving gear that receives the rotation of the timing gear engine or PTO. The Head. the position of the gear coupling, or rigidly connected to the shaft of the pump either rotates freely on it. Produce switching on and off of the pump is only possible if the engine is stopped.

Oil by pump falls from the tank to the distributor and then to workers HZ, if the spool of the distributor is located in the working position (on the rise or slave descent. Equipment ).. In the neutral position, oil is drained into the tank.

During operation of the dozer blade spool of the distributor may receive additional fourth position in which the cavity through the GC valve connected to tank. In this case, the oil can flow freely, and the attachment bodies -. To move under the influence of gravity

To interact with the atmosphere, necessary due to the different pace. modes of operation, the HS is equipped with a breather. The pressure gauge is measured. In the case where the hydraulic tanks is used as the power elements of the hood, their complement trunnions for mounting the front hydraulic cylinders hinged system.

Front mounted system includes HZ 2-sided action, standing on the power of the engine hood, the sleeve B. D. and pipelines serving for fastening to the distributor and to each other.

In the hydraulic system there is also pipelines, whose findings are behind the tractor. Their fashionable to use for Port. with GC trailed machine. To ensure easy rotation of the tractor relative to the compound is made via flexible hoses E To avoid breakage and loss of oil at an arbitrary disconnected trailed machines in the pipeline, the supply oil from the tractor to the machine is discontinuous sleeve. The most common hydraulic calculated control with 3 pairs of GC and are supplied with a 3-spool valves, manually controlled.

In heavy equipment, such as DAT-250, DAT-250M, use elektrozolotnikovoe control DCs in the cat th directional control valve spool is shifted to the desired position by means of a solenoid. Elektrozolotniki placed adjacent to the GC (for example in the trunk of a scraper) connecting them to the wiring control. Hydraulic tractors that are used with bulldozers, scrapers or graders need to rely on frequent switching and variable loads.